Many of the greatest adventures take place in the kitchen. Hands move skilfully on the work surface. A gesture, a kind word, a knowing look. Simple ingredients enhance the taste of everyday life, like water, an essential and precious element that, together with flour, is able to release the magic of a dough. Out of all the ingredients - on a par with water - that can transform the ordinary into the extraordinary, there is one that truly counts: being the creator of the food brought to the table, choosing what to cookand when to do it, then being told that it tastes much nicer "because you made it".

There are as many kind of flour, as thereare places on earth where is grown: white for those who like to roll out a thin layer of pasta, semolina for those looking for a stronger flavour, durum wheat that retains it firmness when cooked, and then there is buckwheat, corn or chestnut, spelt or rice flours, on their own or mixed together. MIxing just flour and water, listening to the noises of the kitchen around you; pulling the dough, while the mind frees itself of every thought, until you get a strong but silky sheet, which remains firm when cooked and embraces the filling without letting it escape... Every type of flour recognisable through its own taste and aroma, has a story to tell.

Ready at the table in all seasons. Reinvented all over the world. What's fascinating about fresh pasta - an authentic, exquisite food, that is a simple mixture of flour and water - is its ability to remain popular through the centuries, yet be ahead of the times and adapt to an infinite number of sauces and seasonings. Putting together the two simple ingredients mixed by hand and the dishes chosen according to one's own taste and culture in Marcato. Its range of ecletic, contemporary machines, produced entirely in Italy through a careful selection of materials, allow us to once again to be in control of our food choices. Knowing to serve on the table and preparing healthy dishes - effortlessly and in no time at all - are the new paths to well-being.

Marcato is the world leader in the production of machines and accessories for fresh pasta, biscuits, bread and pizza.

The philosophy of well-made things has distinguished Marcato since 1930, when the work, passion and ingeniousness of Otello Marcato gave rise to products appreciated all over the world today. The culture of healthy eating is the first step toward wellness: starting with pasta, made with simple and genuine ingredients, a symbol of the Mediterranean diet. All Marcato products are designed for those who love things done perfectly and for those who have rediscovered the pleasure of eating well and safely.

The company, which has been in business for about 90 years, has leveraged its experience to conquer the home and foreign markets, promoting the authentic “Made in Italy” brand everywhere.

Marcato has always produced in Italy, using sustainable, environment and health-conscious manufacturing processes. The constantly evolving research, the use of cutting edge technology, innovative materials and attention to detail have resulted in a range of versatile and functional products of the highest quality.

In a small workshop behind his house, Otello Marcato creates the first machines for rolling pasta. Using his bike, he sells them to families in the neighbouring villages.

The first factory is established in Campodarsego, in the province of Padua. Although now extended, today it is still the place where Marcato produces every single component of its product range.

The first order arrives from across the ocean. Pasta machines are shipped to Philadelphia, in the United States. Today the company's product are available in over 80 countries around the world.

Atlas is born, the machine that has become an international icon of good food, creativity and wellness.

The expansion into new markets and investments in R&D make it necessary to open a new factory, in front of the original one.

In addition to the Made in Italy guarantee, the quality of materials used and product design, Marcato promotes wellness by enhancing technological innovations to safeguard the health of users.

Marcato celebrates its 85th anniversary with over 100 employees, enhancing the industrial development project in Italy.

Marcato consolidates its sales with 70% heading abroad and 30% staying in Italy. Quality and a very low defect rate continue to be the stand-outs.

Marcato produces and packs up to 2,500 pasta machines a day and about 250,000 rollers a month.  The company embraces the principle of "circularity", reusing most of the production waste. 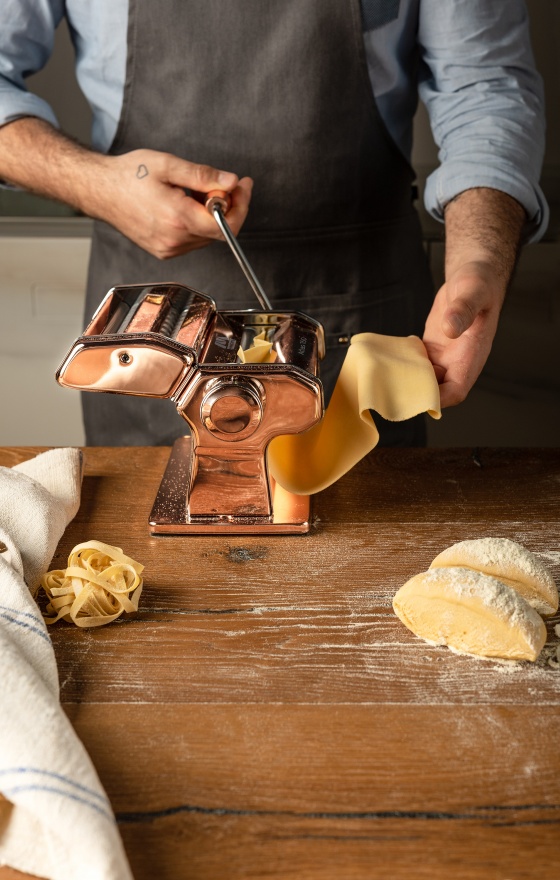